This is a summary of the 2016 CMG imPACt conference Best Paper Award.

Flash based storage is revolutionizing the storage world. Flash drives can sustain a very large number of operations and are extremely fast. It is for those reasons that manufacturers eagerly embraced this technology to be included in high-end storage systems. As the price per gigabyte of flash storage is rapidly decreasing, experts predict that flash will soon be the dominant medium in high-end storage.

But how well are they really performing inside your high-end storage systems? Do the actual performance metrics when deployed within a storage array live up to the advertised Flash latencies of around 0.1 milliseconds?

We analyzed measurement data from actual, normally loaded production storage systems and saw that typical back-end read response times for Flash are much higher than the advertised ‘native’ latency of around 0.1 ms. In the picture below, for instance, the values are all over the place, and the peaks have values up to 1.8ms.

What causes these response times to be so much higher than native Flash latencies? Why are the curves so jagged? And why is the variation in response time so high? 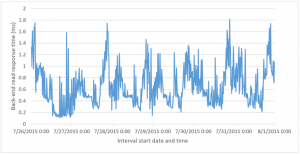 To answer these questions, we analyzed more than 30,000 intervals of SMF data from 10 different production systems. Our analysis revealed that the reported back-end response times are not always what they appear to be. In the paper, we describe two distinct sources of asynchronous activity for which the reported back-end performance is very peculiar – either extremely high or very low. The low values match the advertised Flash latencies, and we found an explanation for the high values.

After filtering the data samples like this to focus on application-generated back-end activity, we show that the back-end read response time has become linear and predictable; the curves are no longer jagged, and the sharp peaks disappear. The values are still significantly higher than the raw latency, for which we pose an explanation.

This paper is very valuable for performance analysts to learn how to draw correct conclusions when looking at reported back-end response times. It shows how to interpret the SMF data, how to distinguish the types of back-end operations, and how to show them individually to determine the actual performance that your applications are receiving from the Flash arrays.

Should I Disable SVC Write Cache for Flash?

It has been suggested that in order to maximize throughput for large sequential operations on SVC volumes residing entirely on IBM Flash systems, you should consider disabling the write cache.

How to Determine Flash Candidates in Your Environment

If you are getting ready to add flash, it is important to see how much of your capacity is a good candidate for flash so you aren't throwing away money on flash you don't need

This paper analyzes the performance of Flash and SSDs when deployed in high-end storage, using RMF measurements from production systems.

This paper analyzes the performance of Flash and SSDs when deployed in high-end storage, and shows that the native latencies of around 0.1 ms for enterprise SSDs and Flash are not realistic expectations for actual back-end response times in a storage system.