Almost all new storage offerings these days offer some level of support for Non-volatile Memory Express (NVMe). The purpose of this blog is to help the reader understand NVMe and prepare them for successful adoption of this powerful technology. It is an exciting paradigm shift that will be in the datacenter for the foreseeable future.

The basis of most of today’s storage protocols, including Fibre Channel, is the SCSI standard, which was established in the 1980’s. Although the SCSI command set has been updated multiple times since, it is still too sluggish for today’s high density and high capacity all flash and hybrid flash arrays.

Prior to the advent of SSDs, the bottleneck of the storage solution was the spinning disk. The latency incurred due to the rotational speed of the platter and the seek time of the heads was the limiting factor.

With the advent of flash drives, the bottleneck has moved to the data path. NVMe is the heir apparent to SCSI-based protocols. The NVMe standard defines both an interface and a protocol that was designed to take full advantage of the speed offered by solid state drives.

NVMe uses the PCI Express (PCIe) standard, which defines a high-speed serial bus for support of internal drives. It improves on previous bus standards by featuring:

NVMe was originally released to take full advantage of flash capabilities and provides a significant advantage over both SATA and SAS interfaces locally.

These limits were adequate for spinning disks but are a limiting factor when supporting flash drives. NVMe queues are designed so the I/O commands and responses operate on the same processor core to take advantage of the parallel processing capabilities of multi-core processors. This allows each application or thread to have its own queue, minimizing performance impacts.

NVMe eliminates wasteful SCSI and ATA overhead by having all commands the same size and located in the same position within the transmitted frame. Figure 1 illustrates the local connectivity for NVMe drives. 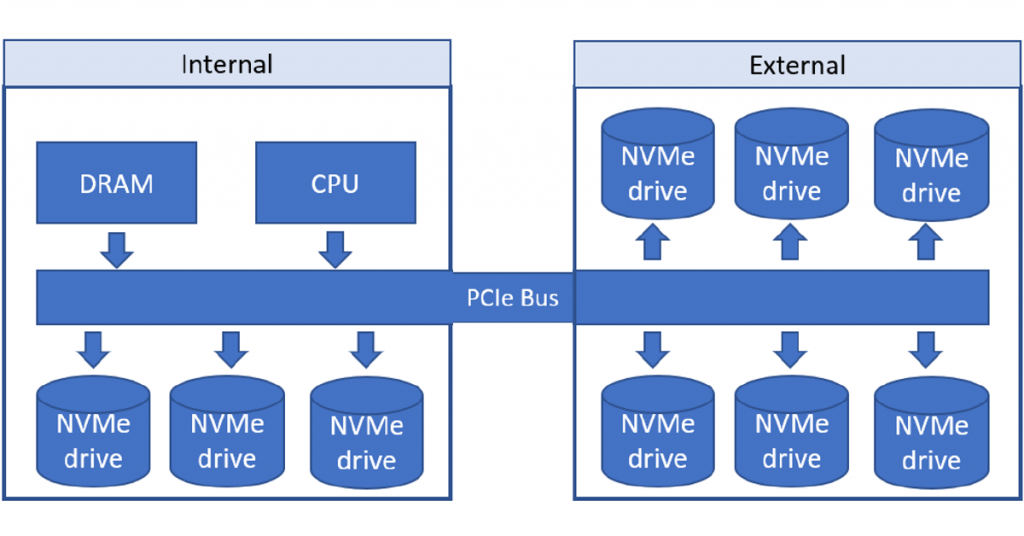 As of this blogs publish date, NVMe is supported by all major operating systems, including Windows 8.1, Windows Server 2012R2, RHEL 7.x, FreeBSD, Solaris S11.2, VMware ESX 6.5, and later updates for these operating systems. One should always check the compatibility matrices for all equipment prior to deployment to ensure end-to-end compatibility.

Using NVMe within the server locally doesn’t scale at the datacenter level, so NVMe over Fabrics (NVMeoF) was released for Fibre Channel in 2014 and subsequently for a number of other transport protocols:

The remainder of this blog will concentrate on NVMe over Fibre Channel (FC-NVMe).

Since the Fibre Channel Protocol (FCP) and iSCSI are really SCSI over FCP and SCSI over Ethernet, respectively, they inherit the innate sluggishness of the SCSI protocol. The Fibre Channel transport, however, can transport multiple higher-level protocols at the same time, such as FCP, FICON, and FC-NVMe (the specific frame type used by NVMeoF).

This means that FC-NVMe can be used on the same switch as your existing FCP or FICON traffic. Most FC-NVMe HBAs support both FC and NVMe-FC, allowing support of legacy FC equipment. In order to make use of FC-NVMe, the host must have an FCP/ FC-NVMe HBA.

Although SCSI and NVMe use different stacks, there are some similarities. SCSI uses the logical unit number (LUN) to identify different volumes within a single storage target wherein each volume has a LUN number. NVMe uses the namespace to accomplish that functionality. An NVMe namespace ID is a set of logical block addresses (LBAs) to map a volume to an addressable unit.

There are multiple things to consider when adopting FC-NVMe to ensure a successful migration:

As always, one should check vendor support matrices as part of the planning phase of implementation.

One can compare the adoption of NVMeoF to that of IPv6 in that migration to NVMeoF is typically done in a phased approach. In the end state, there are usually remnants of the legacy protocol. Since most HBAs that support FC-NVMe also have legacy FC support, it’s easy to initially migrate just the workloads that require the speed of FC-NVMe, while leaving legacy FC volumes in place.

When it’s time to cut over to production:

Adoption of NVMe technology doesn’t need to be painful. With the proper preparation and a scaled and well documented rollout, you will be able to enable your enterprise with blinding speed storage with a minimum of unscheduled downtime.

Cleaning up the SAN Fabric: Getting Your House in Order Part Two

Cleaning up SAN fabric zones and storage array masking views are often a forgotten part of good storage hygiene. Although unused zones and masking views may seem harmless, they pose an availability risk to your environment on multiple fronts.

This webinar focuses on the business value of resiliency and optimization by deploying more intelligence and automation for Enterprise Storage operations.

Avoid Islands In Your Data Lakes

Executives have been asking for a holistic view of the enterprise applications and infrastructure for years. The result has been a slew of overly complex, hard to maintain, expensive, and siloed IT management solutions.