The primary performance indicator for front-end performance is host port latency because this is a measure of how the end host perceives data flow. HPE 3PAR refers to this as service time measured in milliseconds. There are many components of the data path that can affect front-end performance, so high front-end latency can be indicative of problems elsewhere.

Typically, poor front-end performance is caused one or more things:

Front-end port saturation occurs when a host port is at or near its rated throughput.

A good rule of thumb is that a 16 Gb/s (2000 MB/s) Fibre Channel port will start showing performance degradation at roughly 75% of its rated speed, or at 12.6 Gb/s (1500 MB/s), so it is preferable to keep peak port throughput beneath that figure.

Another thing to consider is how well balanced the array throughput is across configured front-end ports. This is especially true if you are depending on 3PAR’s port persistence feature to provide resilience in the event of a host port or node failure. For example, if port 0:1:1 failed, it’s partner port, port 1:1:1 would take over its workload. In this example, port 1:1:1 must have sufficient headroom to be able to take on that throughput and still be under the 75% threshold established earlier.

Figure 1 shows an example of an interactive, automatically generated HPE 3PAR Health Insights chart displaying the overall performance of a group of HPE 3PAR storage arrays. The red border indicates that at least one of the arrays has a performance exception and the red exclamation point shows that array 9450-857L is the culprit, as it has high read and write throughput. 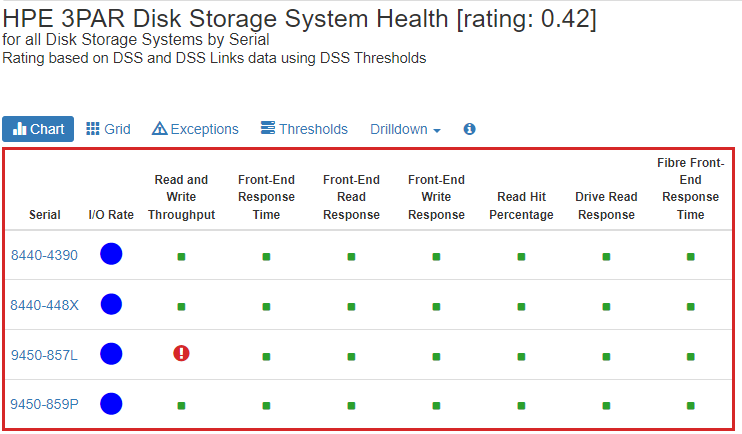 Health Insights charts such as these make it easy to spot problem areas in your environment because the performance metrics are automatically assessed at each time interval. This automatic assessment allows even someone without a storage performance background to see where issues exist.

By clicking on either the red warning symbol or the Serial name, 9450-857L, we automatically drill down to the next step in the troubleshooting process, as shown in Figure 2.

In this example, the thresholds that determine whether throughput is high take into account not only the capabilities of the storage array, but also the capabilities of the nodes and node HBA ports, giving a comprehensive look at array throughput performance. These pre-built, static thresholds are conservative out of the box, but can be adjusted to account for customer preferences. For metrics such as throughput and response time, dynamic thresholds are used instead.

Continuing our troubleshooting root cause analysis journey, we can again click on the Read and Write Throughput line from Figure 2 and automatically drill down to the next step, as seen in Figure 3. Here, we can see the culprits of our front-end performance exception.

In this case, the storage administrator should consider spreading the workload more evenly across the configured ports on this array so that there aren’t some ports that are overutilized while other ports are basically idle.

In this case, the issue was front-end port saturation, but poor front-end performance can be caused multiple other factors, such as poor cache performance or overutilized back-end media. Any saturated component in the chain can impact the entire storage array and cause poor performance. Having easy access to pre-built, non-static reports with intuitive and interactive drilldowns is crucial for modern day performance analysis and can help you keep your HPE 3PAR systems running optimally.

The key to performance analysis is understanding the performance metrics that HPE 3PAR provides.

For an overview of the other key performance metrics, read my next blog, “Understanding HPE 3PAR Key Performance Metrics.”

How Do I Detect Imbalances in HPE 3PAR?

HPE 3PAR is an enterprise-class storage array that delivers excellent performance if properly implemented. This blog covers the key metrics to help you understand the performance and health of your HPE 3PAR system.

Whether you’re in the early stages of product research, evaluating competitive solutions, or trying to solve a problem, we’re happy to help you get the information you need to move forward with your IT initiatives.