I have lived in the same metropolitan area for my whole life. I have never had any compulsion to leave my beloved Colorado. And as such, I have had the opportunity to observe the successes and failures of the city planners as the Denver area has grown and continues to grow throughout several decades – as has the growth of z/OS.

I would like you to envision a portion of z/OS like the roadway system of a growing city. As people have moved into our area, the roadway infrastructure has had to be changed to accommodate. I am sure that the city planners a century ago thought that their design would last a very long time, and they were right to a certain extent. It would be ridiculous to assume that the roadways would remain exactly the same several decades later.

Some roads that were considered “minor” in the beginning have had to be changed as demand changes. Two lane roads are now four or six, traffic lights have to be installed, road repairs are common, etc. On the other hand, I still see some things on our roadways that have not been changed in years and wonder why they have never been addressed.

WLM Goal Mode was first announced in 1994, and shops switched to the newer way of CPU distribution thinking over the next decade. The people responsible for maintaining the compatibility mode definitions were usually also responsible for creating the new WLM service policies. So the CPU top-down distribution methodology was ingrained in MVS performance thinking and was easy to translate into velocity goals as the primary service class goal.

Half of the service policies that I analyzed still use a “top down” approach, which is similar to the compatibility mode way of thinking. What I consider “top down” is when high velocity goals are high in the WLM service policy (importance’s 1 and 2).

Here is an example of a top-down service policy: 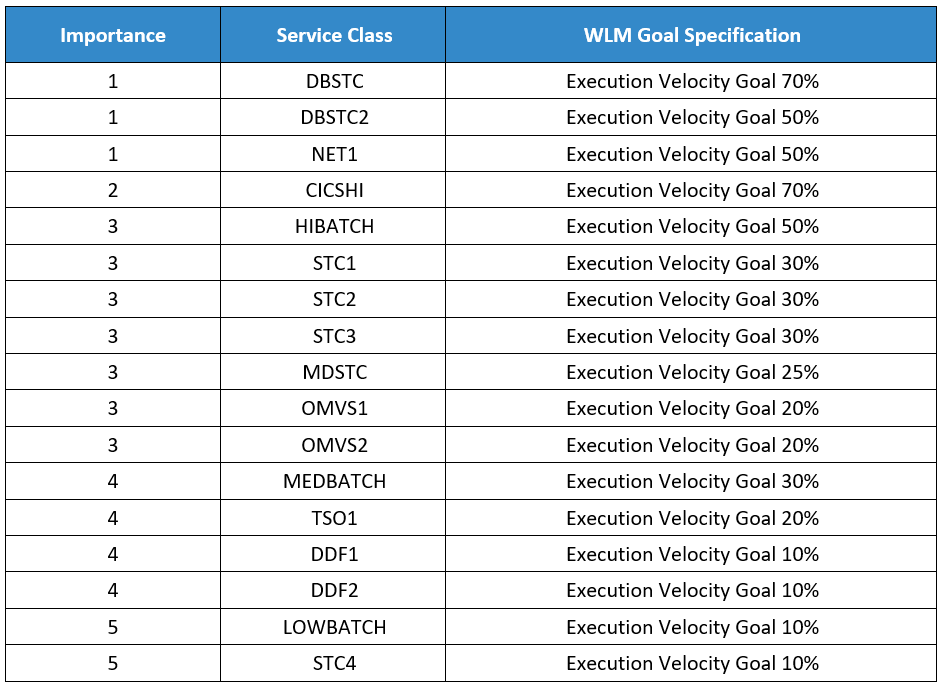 You can see how the higher velocity goals are intended to perform better even during times of resource constraint. This methodology is very similar to the old compatibility mode methodology.

For many of the service policies that I examined, the high velocity goals were generally importance 1 and 2 service classes.

Within every WLM service policy is an option to tell WLM to use I/O Priority Management or not. This option is located in the “Service Coefficient/Service Definition Options.”

If turned on, then the DASD Using and Delay samples are used within WLM to calculate the velocity.

The default for this option is “no,” and the IBM recommendation is to turn this option on “yes,” however, based on what we have observed at IntelliMagic, leaving this option as “no” is best.

The reason for this recommendation is that the velocities that are calculated using DASD Using and Delay samples are usually a surprise and can result in unexpected workload management.

The following are two examples that illustrate the issue. For both examples, I/O Priority Management is turned on.

Importance 1 service class STCA has a velocity goal of 70. The achieved velocity reported by RMF is 91.1.

Turning off I/O Priority Management would result in an achieved velocity of 30.2, and WLM would look for donor service classes for CPU, which is probably what the Architect of the service policy intended.

Figures 1 and 2 below illustrate the Using and Delay samples for the service class above across a much longer time period. In the first figure, you can see how DASD samples dominate the service class. Once those samples are removed by turning off I/O priority management, the samples that are normally considered during WLM planning are seen much better.

Importance 4 service class STCB has a velocity goal of 50. The achieved velocity reported by RMF is 93.1.

Using the WLM samples (Using and Delay), the velocity calculated by excluding DASD samples is 41.1. If the velocity goal of 50 was written with the understanding that the I/O samples are included and would inflate the overall velocity, then everything would be fine. WLM would look at this service class as a potential donor (lower importance/overachieving service class).

Turning off I/O Priority Management would result in an achieved velocity of 41.1, and WLM would not look at this service class as a donor for CPU.

Understanding When to Turn I/O Priority Management On or Off

This blog entry has given you the knowledge that you need to make informed decisions about the I/O Priority Management option. If you are concerned about how I/O is prioritized with this option turned off, rest assured that the I/O priority will still follow the assigned dispatch priority.

Revisiting this one option of your WLM service policy will help keep your z/OS roadway running smooth and as expected. Feel free to reach out to us at IntelliMagic if you would like assistance or further explanation.

This whitepaper covers how utilizing a modernized approach using artificial intelligence techniques helps you to manage z/OS Workload Manager goals and performance and ensure that your Service Levels are being met.

WLM I/O Priority has been around for a long time and is in use at many data centers, but many sites are not even clear on what the setting does.

zAcademy: How Long is Too Long? Multi-period Service Classes

Multiple periods are one of the most powerful – and dangerous – tools in the performance analyst’s arsenal. They can ensure critical work gets done and runaway work can’t take over.