The System z Integrated Information Processor (zIIP) is a specialty processor that can be used to relieve the general purpose processors by offloading some Db2 and other z/OS workloads. zIIP processors are typically less expensive to purchase and also run at full speed on sub-capacity CPU models. An additional advantage is that software usage rating (e.g.rolling 4-hour average MSUs) is not affected since IBM does not impose software charges on workloads that are running on a zIIP.

Despite these benefits, zIIP processor usage may not always be what one hopes for. This blog aims to educate readers on how to investigate zIIP data, how to enable Simultaneous Multi-Threading, and what may cause zIIP processors to spill over to general purpose processors.

zIIP eligible work will try to execute on a zIIP processor. If there are insufficient resources available (e.g. the zIIP processor is busy), then work may be dispatched on a general purpose processor.

This mechanism can be controlled at the system level by using the IIPHONORPRIORITY setting in IEAOPTxx in SYS1.PARMLIB. At the WLM Service Class level, use Honor Priority to control whether work is allowed to “spill over” onto a general purpose processor.

Be aware that if general CPs are used for zIIP work, this may affect the rolling 4-hour average if it occurs during the peak time. If Tailored Fit Pricing is used, this “spill-over” CP work will be counted towards the billable MSU monthly consumption. This shows that it is important to be aware of zIIP utilization and if zIIP eligible work is running on general purpose processors.

zIIP processors are capable of running multiple threads of work simultaneously. SMT (Simultaneous MultiThreading) is supported on all current zSeries processors. The prerequisites for enabling SMT for zIIPs are:

Be aware that setting PROCVIEW to CORE will result in RMF reporting on CPU cores (threads) and not on processors.

Based on the RMF 70.1 data, we can observe the zIIP utilization. In Figure 1, we can see the utilization based on processor cores. 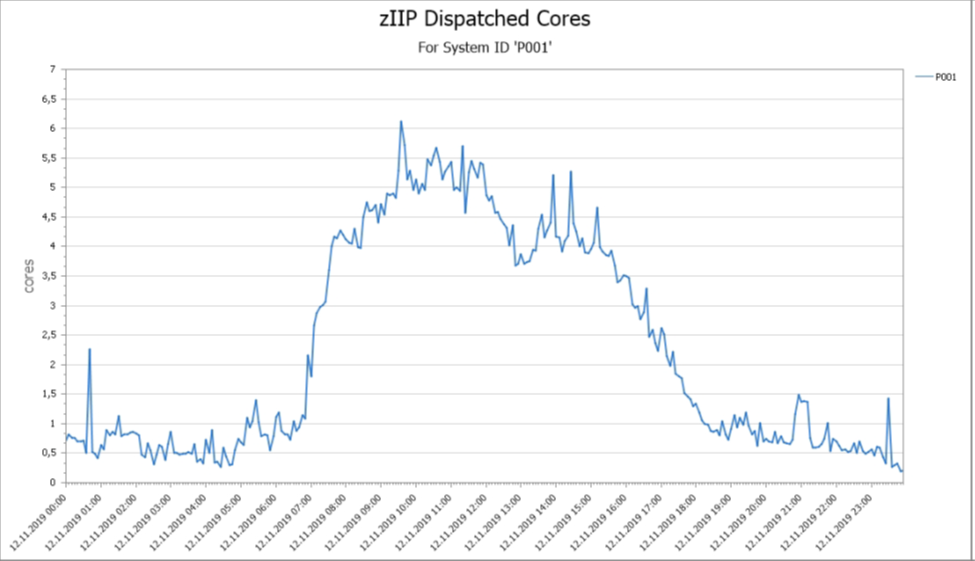 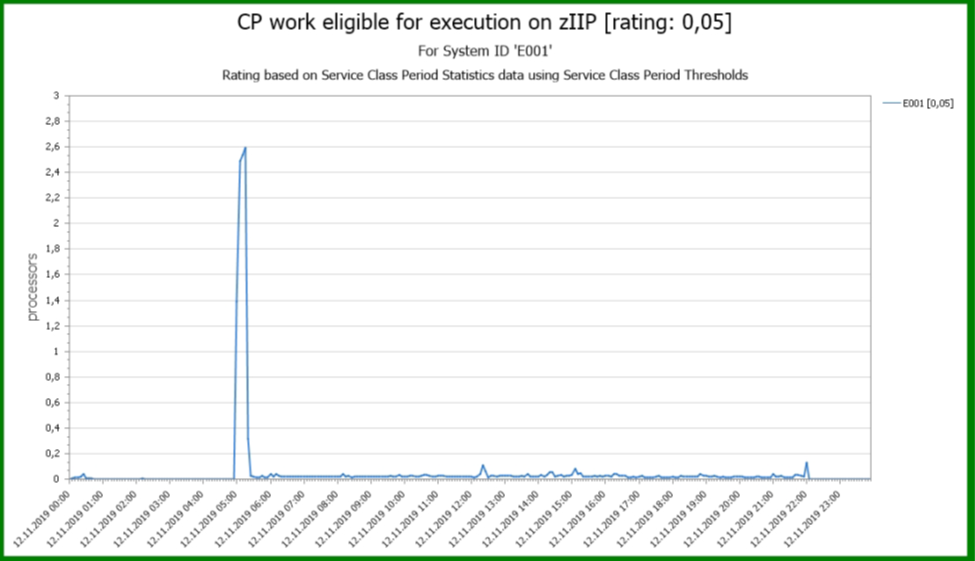 When RMF performance data is combined, IntelliMagic Vision allows a drill-down to the WLM Service Classes that are executing at that time. This allows you to determine which workload is now running on a CP instead of a zIIP processor. See Figure 3 for an example of a drill-down to Service Class.

Note: This drill-down is only showing WLM Service Class work that is zIIP eligible but running on a general CP. Other drill-downs exist for showing all work running on zIIP processors. 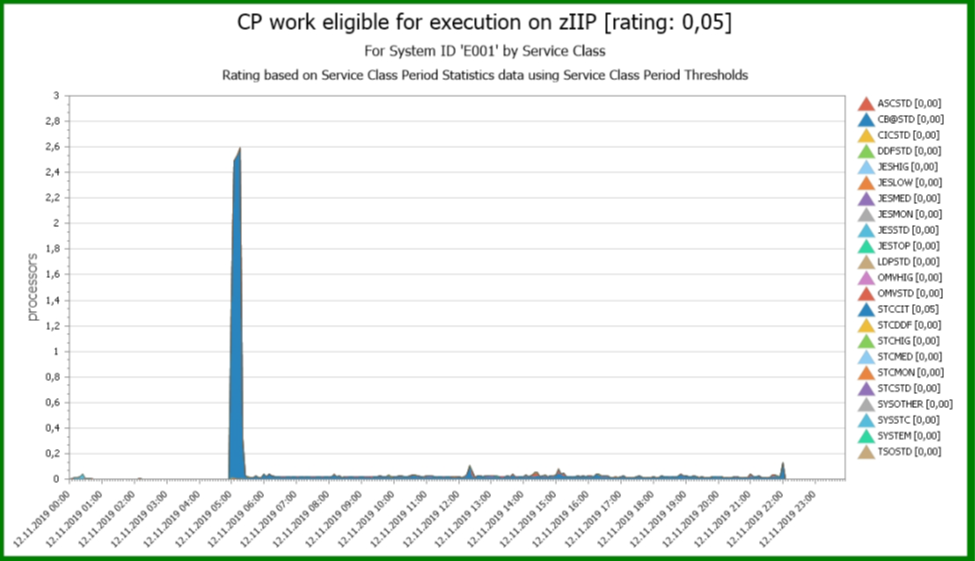 When SMT is turned on for zIIP processors, there are additional metrics that can be observed in RMF. Some of the metrics are:

Productivity = CF / mCF
Figure 4 shows us the zIIP thread utilization for a sample time frame (1 day). We can see that both threads are being used (yellow and blue areas). 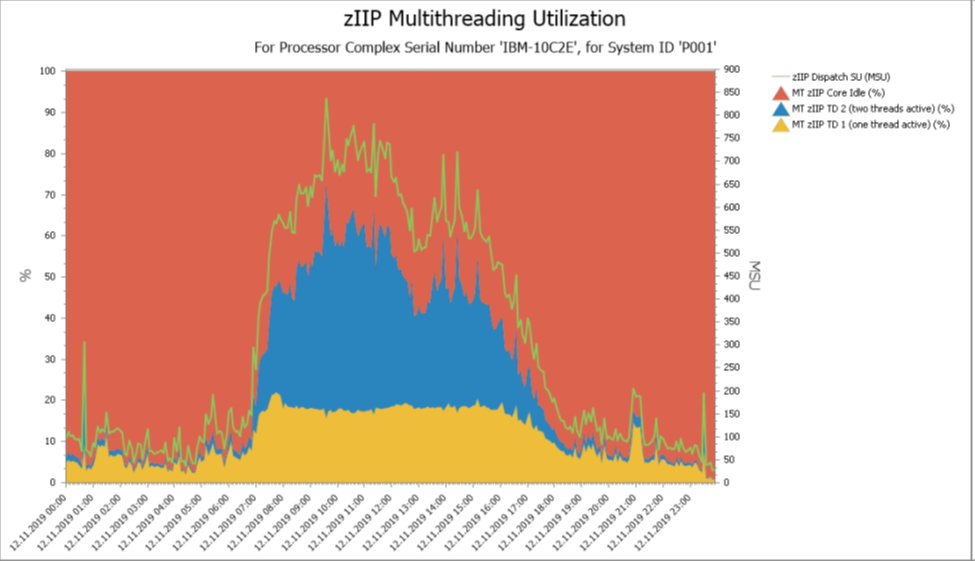 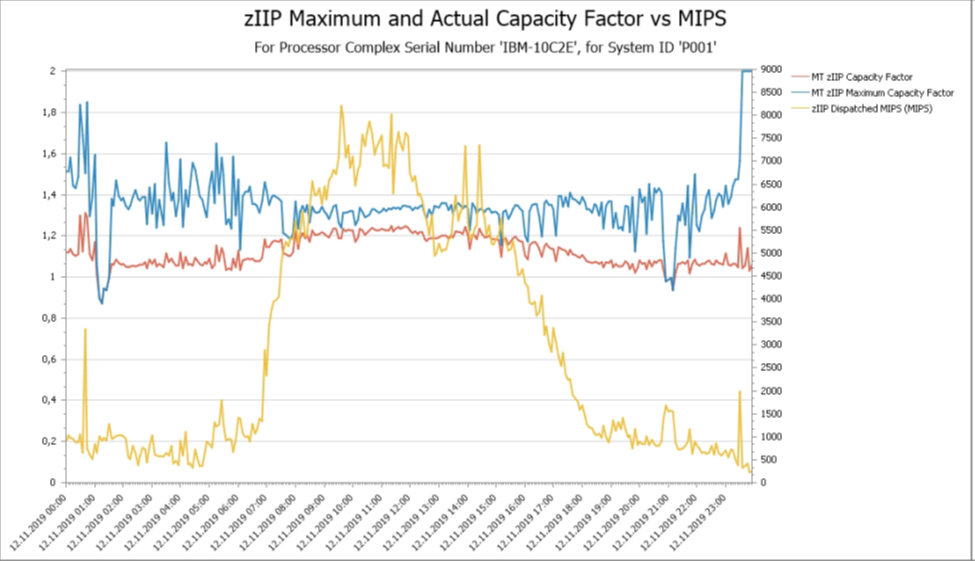 zIIP processor usage may not always be what one hopes for. Depending on the workload and environment, work may “spill over” to general purpose processors. On modern hardware, turning on SMT may bring additional zIIP resources online when they are needed. What is needed is a solid performance reporting software such as IntelliMagic Vision to highlight zIIP usage and support further detailed investigations when problems arise.

The z16 introduced substantial processor cache design changes. Learn how this impacts the operation and efficiency of your workloads.

This session will introduce you to several best practices for enhancing your analysis of CICS Transaction and Statistics data.

Gain a better understanding of how XCF operates in general, tips about how to optimize their environment for the new paradigm, and information about what can be learned from the new Path Usage metrics.