Since its introduction, many mainframe sites have made the move to the Software Consumption Solution (previously Enterprise Consumption) offered by IBM as one of the two options within Tailored Fit Pricing. With Software Consumption, software is charged based on every MSU consumed for the entire month rather than MSU quantities being based on the monthly peak 4-hour rolling average. IntelliMagic Vision release 9.30.0 significantly expands previous Software Consumption reporting.

These pre-built reports provide cumulative and interval views of CPU consumption for both GCPs and zIIP-eligible work that overflows onto GCPs. This parallels IntelliMagic Vision’s powerful existing average-based CPU reporting in the “Processor Reporting” and “zIIP and zAAP Reporting” focal points, with similar top-level reports and drilldowns. All Software Consumption reporting is in MSUs, the unit of consumption pricing (not in MIPS or CPs).

In an Software Consumption environment, it is very likely you will want to analyze CPU drivers below the system level. IntelliMagic Vision provides the ability to view MSU consumption by workload (shown above), service class, report class, all the way down to address space.

To report at those levels of detail requires moving beyond RMF 70 data to RMF 72 and even SMF 30 address space based records. Note that although official “how much do I pay IBM” Software Consumption MSUs are derived only from RMF 70 data, calculations below the system level are proportional and thus very helpful for detailed analysis.

Other report sets quantify the consumption of zIIP Eligible work that overflowed onto GCPs. This is of interest in an Software Consumption licensing model because all these MSUs generate software expense.

Sites with a significant amount of overflow may choose to take actions such as (a) increasing zIIP hardware capacity or (b) specifying Honor Priority=NO in their WLM policy at the service class level for workloads that are not extremely response oriented. 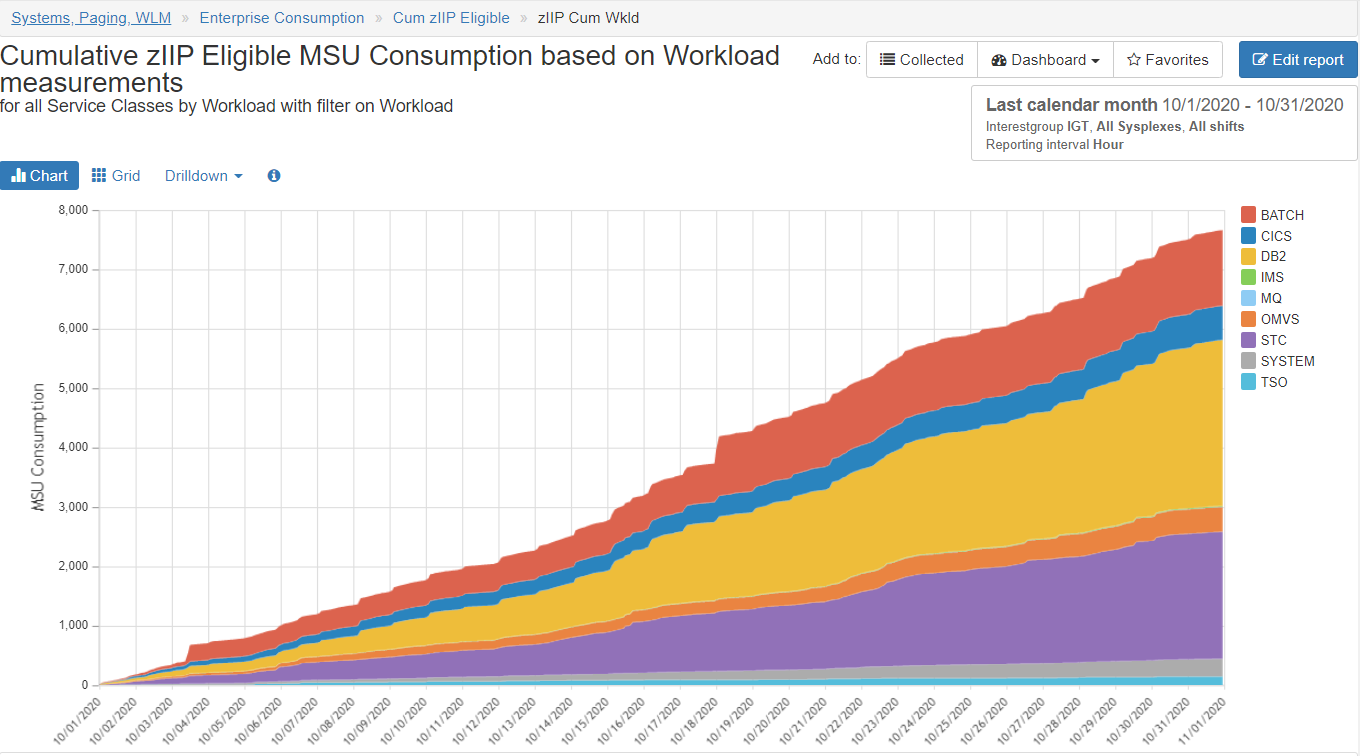 For users who have already adopted an Software Consumption software license model, or who will be evaluating in the future whether to adopt such a model, IntelliMagic Vision provides intuitive and powerful visibility to analyze and manage CPU consumption from that perspective.

From a performance perspective, IBM’s Tailored Fit Pricing opens up an array of options for reducing MSU consumption. This article summarizes tuning actions that you can take at the infrastructure level to realize CPU reductions.

The z16 introduced substantial processor cache design changes. Learn how this impacts the operation and efficiency of your workloads.

This webinar shows ways sites have reduced CPU and expenses so that you can identify ones potentially applicable in your environment.

Continual visibility into how the z/OS systems infrastructure is handling your workloads helps you improve performance and protect availability.
Learn More

Industry-leading visibility and expertise to analyze and proactively identify potential I/O issues in your disk and virtual tape and replication architectures.
Learn More