In my previous blog, we examined the key architectural differences between the IBM SVC and the EMC Vplex. We also discussed the key performance metrics. In this blog we will examine a single use case where the director utilization and front-end write response times are higher than desired, and we will look at what server is driving the load.

The Vplex systems in question have significant performance issues. We will examine the issues on cluster-1 in this blog. 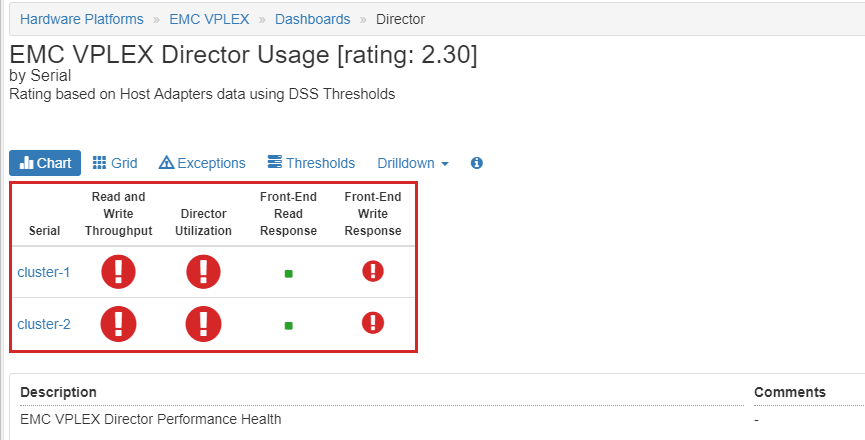 As you can see, the Director Utilization and the Read and Write Throughput have large red icons. This indicates that best practice compliance levels have been exceeded due to the high utilization during most of the period. The Director Front-End Write Response Time is also red. Drilling down to the time charts we can see these key metrics over time as shown in Figure 2: Director Time Charts.

The port throughput is not very high. These ports are rated at 16 Gbps and operating at a negotiated rate of 8 Gbps and running at a peak of less than 20% of bandwidth. They are not constrained.

We have learned the following:

It becomes easier to see the increase in throughput when you look at the volume throughput by drilling down on the cluster VMW_HOSPEDAGEM as shown in Figure 6: Volume Throughput. The volume VMW_IBM_HOSP_dvol110 has the biggest spike. The next step is to see which ESX VMware system and ESX host this is associated with and look at its port configuration.

At this point we know that the increase is coming from host/masking view VMW_HOSPEDAGEM but we don’t really know exactly which ESX host, as the host name VMW_HOSPEDAGEM represents the entire cluster.

To identify the VM, we look at the VMware performance for datastore with the name VMW_IBM_HOSP_dvol110 as shown in Figure 7: VMware Disk Performance Summary. This chart shows the activity for all the VMs on this datastore. There are several VMs but only one has any significant activity and its name is pxl0dirag001.

We can see how it connects by clicking on the current host and selecting the VM to volume drill down which shows us the topology mapping.

This host seems to be configured correctly and the zoning shows four initiators and four target ports, one going to each director in cluster-1. The workload is balanced evenly across the four initiator ports and the target port on director-1-1-A is director-1-1-A_A0-FC01 which was one of the busiest ports as identified previously. 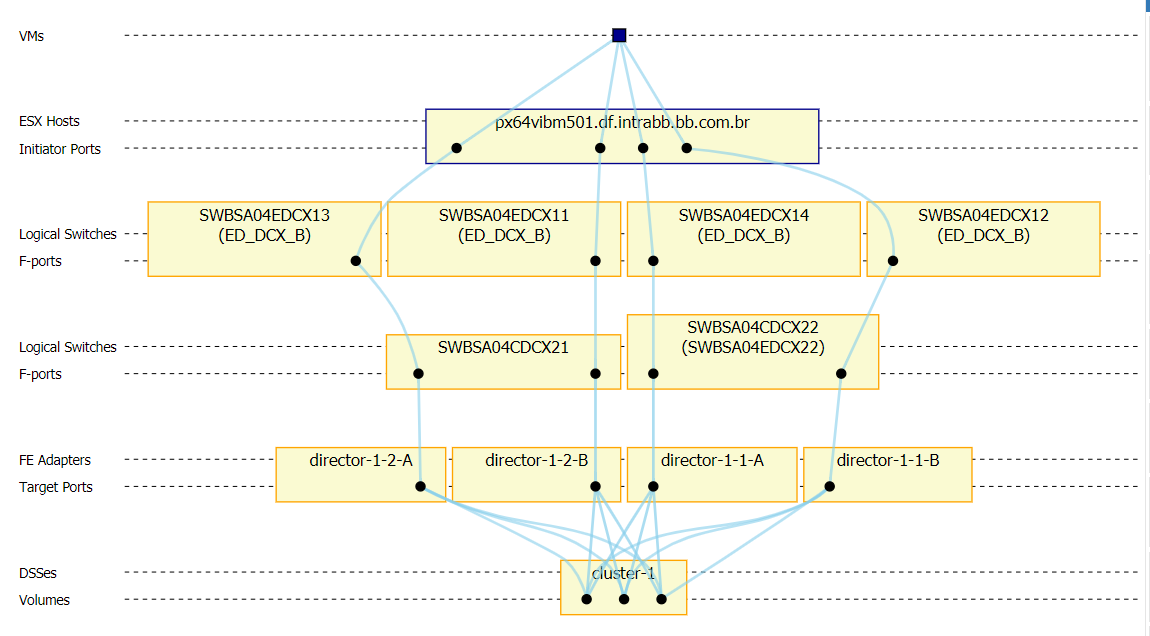 In this we blog examined a particular performance issue on a Vplex system, specifically, we examined a director that had high write response time and high director CPU utilization. We then drilled down to the host that was driving the load and identified the busy volume. After that we used IntelliMagic Vision to identify the VMs on the datastore in question and examined the topology mapping to ensure that there were no configuration or performance imbalances.

Sometimes the work of a performance analyst results in a smoking gun and sometimes it just ends in a cloud of smoke. This was one of those cases where there was a lot of smoke and you have to draw logical conclusions.

Based on the available measurements, it appears that the EMC VPLEX director utilization does not scale well with its available port bandwidth. Likely, the Director utilization is influenced by other factors such as the performance of the back-end storage and replication which were not analyzed in this blog.

This webinar will look at the key physical and logical components that make up Dell EMC’s All Flash and PowerMax storage arrays.

A comprehensive solution that is suitable for everyone from executives looking for cost savings and managing availability risks, to the experienced analyst looking for the most detailed insights.

This whitepaper provides an overview of Dell EMC’s current offerings in the VMAX family, the VMAX All Flash and PowerMax, along with a high-level architectural overview of both storage arrays.